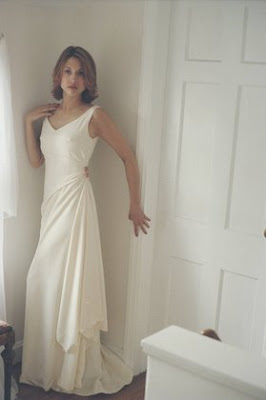 Only within the last twenty years has the evening gown silhouette become so popular for brides. Once upon a time bridal gown meant traditional. Traditional as in Tricia Nixon/Lucy Baines Johnson’s Priscilla designed gowns. Though both gowns were top of the line even by today’s standards, there was little variation on the concept of formal from 1960-1982. If you married in anything different than peau-de-soie or satin, wore your dress shorter, or say a suit, it was considered informal and you belonged at city hall. 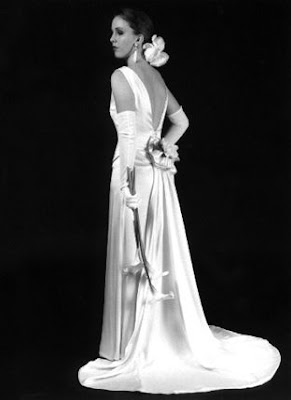 The popularity of the evening gown silhouette was clinched when Carolyn Besette wore that clingy crepe-back satin for her wedding to JFK Jr. in the nineties. Before that the evening gown was around and accepted but more as an alternative in bridal wear; something you donned if you were an outside the box bride getting married in a garden or restaurant. Churches still had issues with clergy starring down into cleavage and guests feasting on bare backs and shoulders during nuptials. After Carolyn’s photos hit the media, designers brought out their own versions of the evening gown from Jean Harlow classics to sheath designs in more structured fabrics like faille. The evening gown silhouette has been one of the most beautiful additions to bridal wear.
Gowns by Amy-Jo Tatum Bridal Couture
Posted by bridechic at 9:05 AM