BRIDES OF THE CINEMA 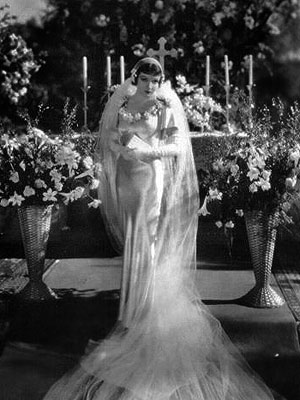 source
Claudette Colbert as Ellie Andrews, Audrey Hepburn as Jo Stockton. No, they weren't real brides but the designers, writers and producers who created them certainly were. Hollywood designers and the actresses who wore their creations influenced the way we look at weddings and fashion today. All the gowns pictured here are works of art and stellar representatives of their times. What could be more 1930s than Robert Kalloch's creation for Claudette Colbert in It Happened One Night? The body-hugging bias cut was still a new, even radical concept in 1934, especially for a wedding gown. During this golden era, it was not Paris anymore as much as Hollywood that decreed fashion. This simple satin gown with florals surrounding the neckline could be found today in a few designer collections. The look has become timeless. Attached to the cap head piece you'll see miles of chiffon netting, a light and airy fabric the designer chose because in this story, Colbert needs to become the runaway bride once she decides Clark Gable is the one. As she runs, the veil, long as it is, lifts and floats beautifully off the ground to produce a kind of 'bride in flight' look. 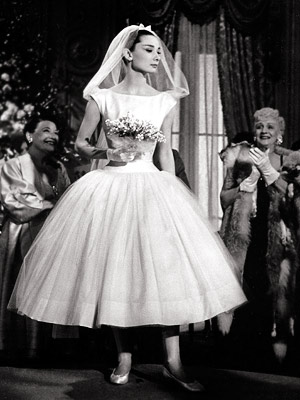 source
The Givenchy on Audrey Hepburn in Funny Face has become a favorite for brides of every decade. When clients bring in inspiration photos so I can get an idea of what they want in a gown, this photo is pulled out often. And sometimes it is not the exact same dress a bride wants so much as 'the look' it evokes, the epitome of pure, flawless design. 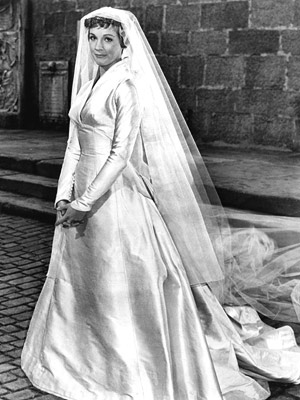 source
Above is one of the purest, most traditional wedding designs out there (the other is princess Grace's--also by a Hollywood designer, Helen Rose). I'm glad I finally found this image of Julie Andrews in Dorothy Jeakins shantung wedding gown. It's from one of the most beautiful movies ever made, The Sound of Music. Raised in an abbey by cloistered nuns, when Maria marries Captain Von Trapp she marches down the aisle alone. This really touched me when I first saw this movie as a kid. So much so that when my own day came to meet my intended and take my vows, I too walked alone and gave myself away. 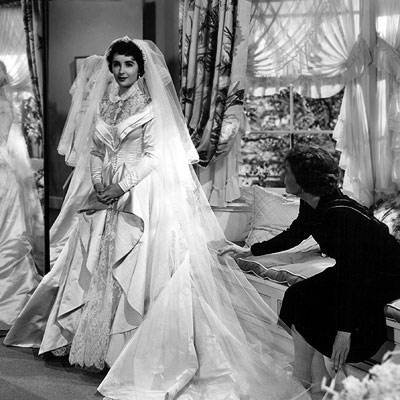 source
The gown Elizabeth Taylor is wearing was standard for its time. Post war, the world celebrated lifts on fabric restrictions by using vast amounts of it in skirts. Bridal gowns were the ultimate show-off the hourglass shape vehicle. The MGM release of Father of the Bride coincided with Taylor's own real, life nuptials with hotel heir, Nicky Hilton. Both her own and fictional wedding gown was designed by Helen Rose.


Below right is Carrie Bradshaw's Ivory silk taffeta confection. It's actually one of the finale pieces from Vivienne Westwood's 2007 "Wake Up Cave Girl" Collection. Hand picked by Sex in the City stylist, Patricia Field, personally, I was surprised Sara Jessica didn't rate a custom designed gown for her role in the film. I mean heck! Check out Audrey Hepburn. Didn't she have that one-of-a-kind-designed-to-fit-her-character Givenchy tulle wedding dress? The suit on the left would have been my choice . . .  . .ultimately Carrie's as well. 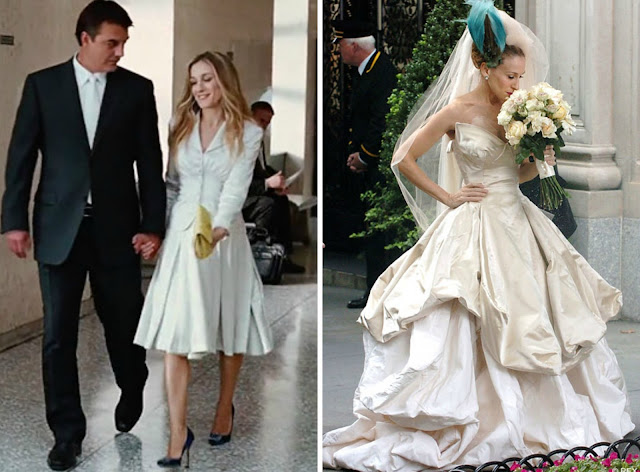 source
Posted by bridechic at 10:30 AM