ALL TIME MOVIE MUST SEES FOR BRIDES 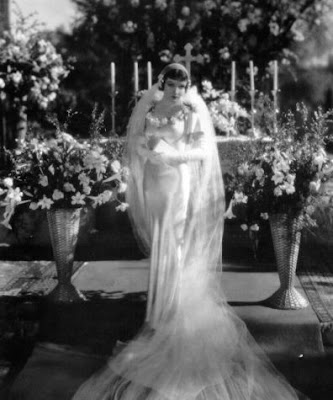 Claudette Colbert as Ellie Andrews, Audrey Hepburn as Jo Stockton. No, they were'nt real brides but the designers, writers and producers who created them certainly were. Hollywood designers and the actresses who wore their creations influenced the way we look at weddings and fashion today. The two gowns pictured here are works of art and stellar representatives of their times. What could be more 1930s than Robert Kalloch's creation for Claudette Colbert in It Happened One Night? The body-hugging bias cut was still a new, even radical concept in 1934, especially for a wedding gown. During this golden era, it was not Paris anymore as much as Hollywood that decreed fashion. This simple satin gown with florals surrounding the neckline could be found today in a few designer collections. The look has become timeless. Attached to the cap head piece you'll see miles of chiffon netting, a light and airy fabric the designer chose because in this story, Colbert needs to become the runaway bride once she decides Clark Gable is the one. As she runs, the veil, long as it is, lifts and floats beautifully off the ground to produce a kind of 'bride in flight' look.
The Givenchy on Audrey Hepburn in Funny Face has become a favorite for brides of every decade. When clients bring in inspiration photos so I can get an idea of what they want in a gown, this photo is pulled out often. And sometimes it is not the exact same dress a bride wants so much as 'the look' it envokes, the epitome of pure, flawless design.
Who else but Audrey Hepburn in Givenchy's tulle ballgown 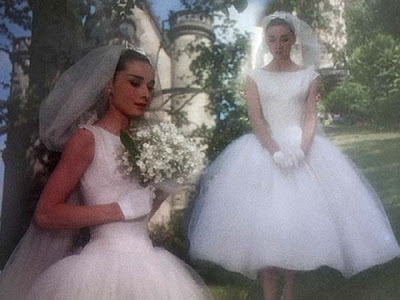 There are so many 'must see' movies for brides who want to borrow some ideas for gowns. Some are golden oldies, others like Sex in the City, still running in movie theatres. All are romantic, all are incredibly inspiring . . . . Most below are out on video or disc/DVD. Watch your favorite and listen to the commentary if there is one--you'll learn so much.
It Happened One Night (1934)
Father of the Bride (1950)
Father of the Bride (remake 1991)
Panama Hattie (1942)
Design for Living (1933)
The Sound of Music (1965)
The Graduate (1967)
Penelope (1966)
Sex and the City (2008)
Special thanks to Movie Diva for all the enlightening movie trivia
Posted by bridechic at 11:30 AM

Don't you just love the way the movies do weddings?! I love this post- and old movies!!!

Movies do have that way of making everything look just perfect. I guess that's why we get so excited when we are little girls. We just can't wait to get married.