Imagine living in a world where fabric was scarce, rationed and silk went for making parachutes. War brides (usually quick to marry fiances going off to war) sometimes had to make do with a best dress or a suit to tie the knot. Formal to-the-floor gowns were offered in the synthetic fabrics that were the newest thing. The classic silhouette of this era was an A-line with a V-neck and long sleeves usually in a high sheen satin.
What have we taken from this era and brought to today's wedding fashion? I'd say the screen goddess look of Lana Turner or Rita Hayworth in a white gown that had more to do with evening glam than bridal. But it all works—the red lips, long wavy hair, clean makeup. It's definitely a look that brides some 70 years later love and stalk every corner of the net to recreate... 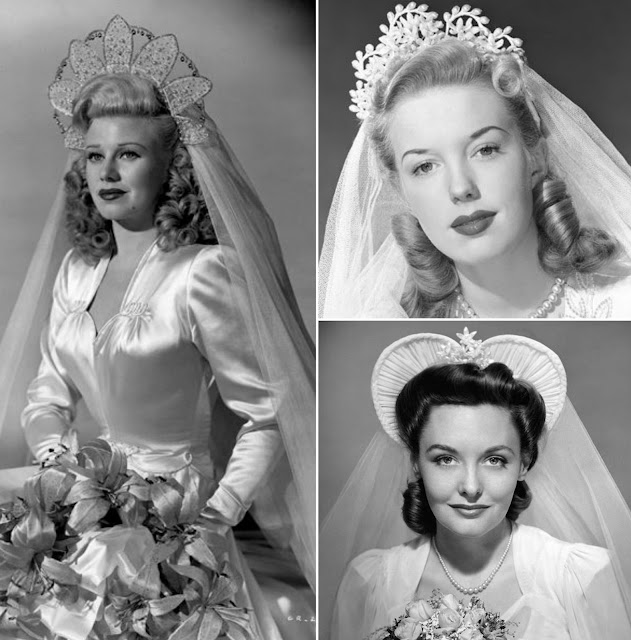 Starting at the top, what the classic 40's bride wore on her head is telling of this decade.  Most popular was a diadem, crown or even a Kroniska, a version of tiara with Russian origins. These headpieces made out of pearls, lace or fabric held a flowing veil. Other headdresses of the day? Snoods, turbans and hair jewelry. Because some weddings had to be planned literally overnight, tulle and netted turban head wraps topped off with bows or florals became the quickly assembled head chic of wartime brides. Snoods especially popular for evening wear of this era held carefully paged hair in place .  The ruffled diadems below grace the heads of movie actress, Olivia de Havilland and Gloria Vanderbilt when she married in 1941. 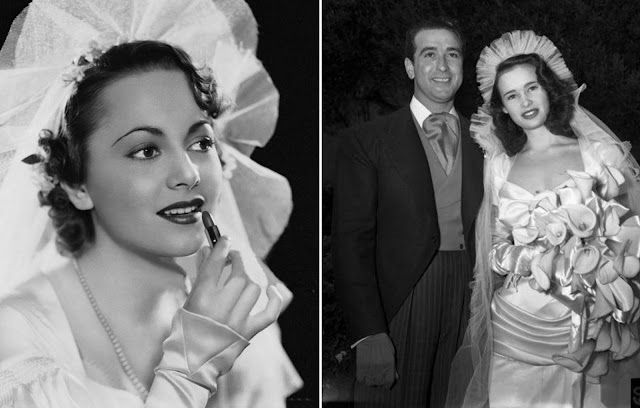 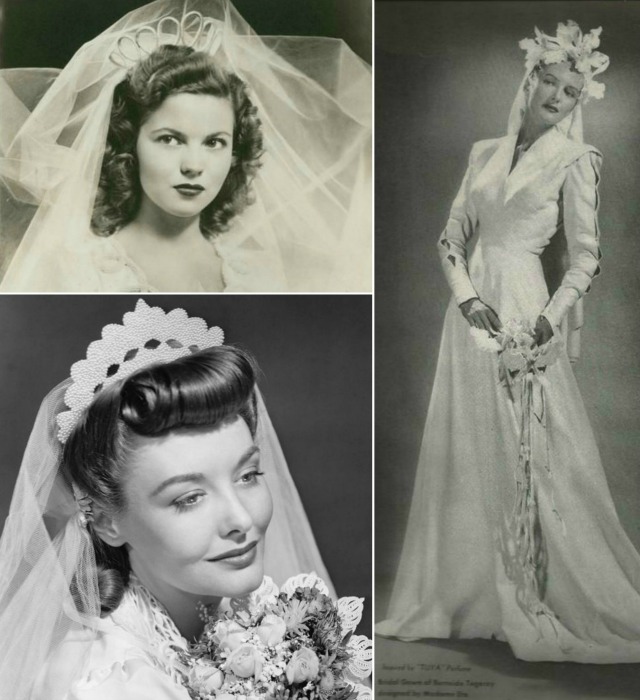 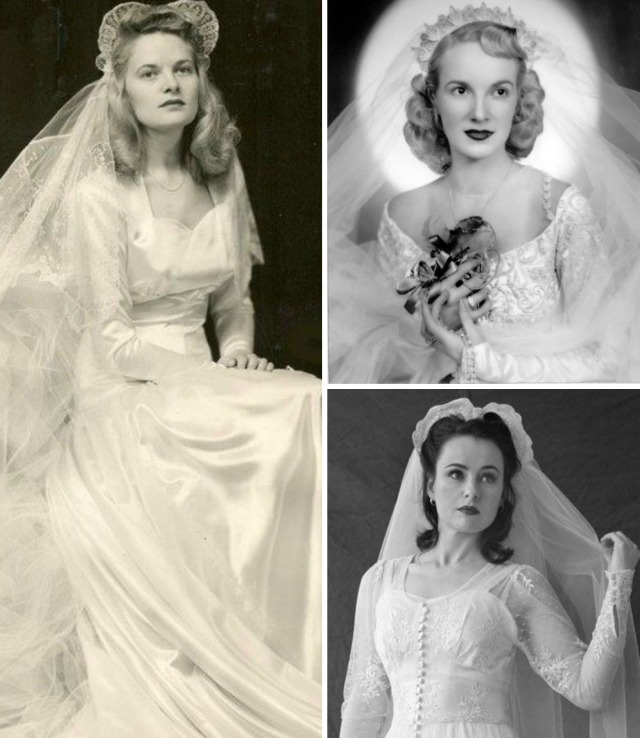 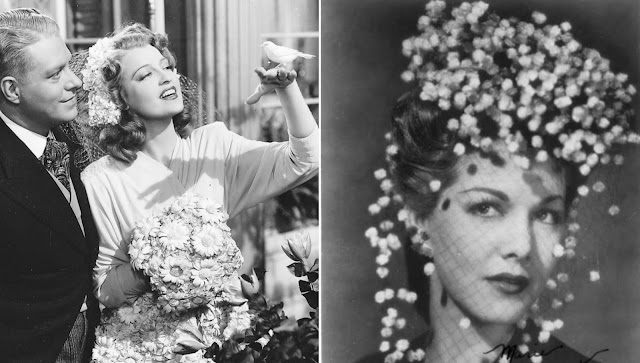 Above: Shorter veils sporting poufs and wraps of netting and flowers were trendy for the more informal or secular wedding.
Below: The Silhouettes below are A-line in the highest-sheen white satin.  The dresses directly below sport peplums, graduated apron-like over skirts characteristic of the 40s.  Another clue to recognizing fashion from this era is padded shoulders.  In the images below, Ginger Rogers and Martha Scott are flaunting big shoulders with hats holding their veils. 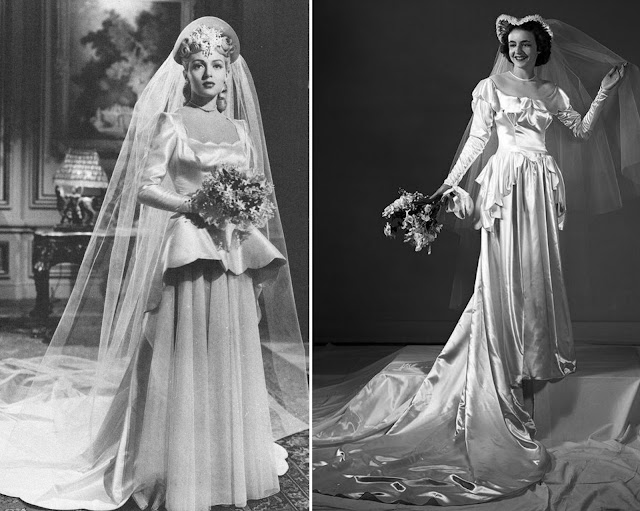 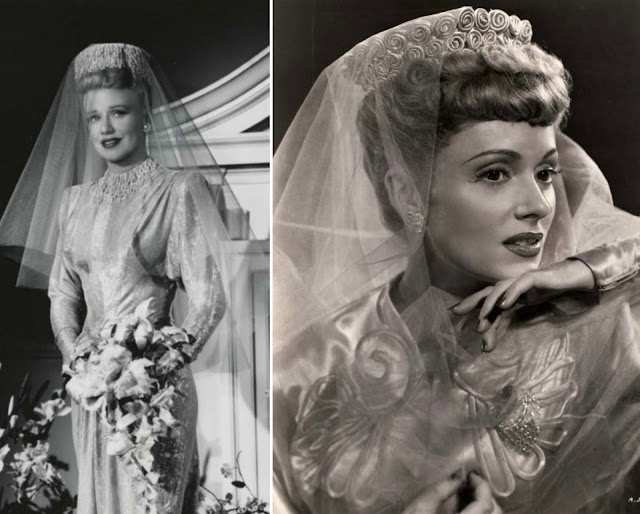 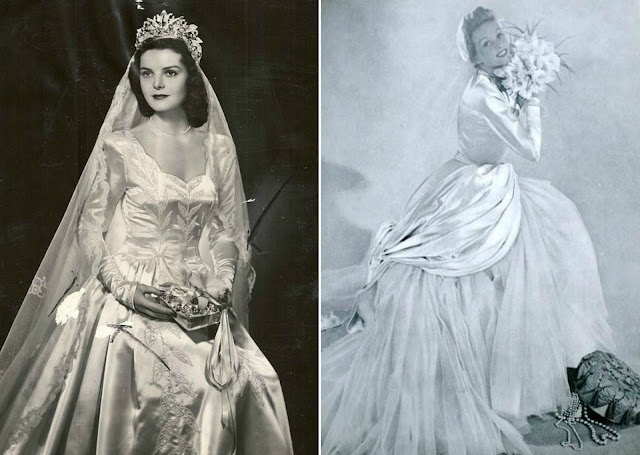 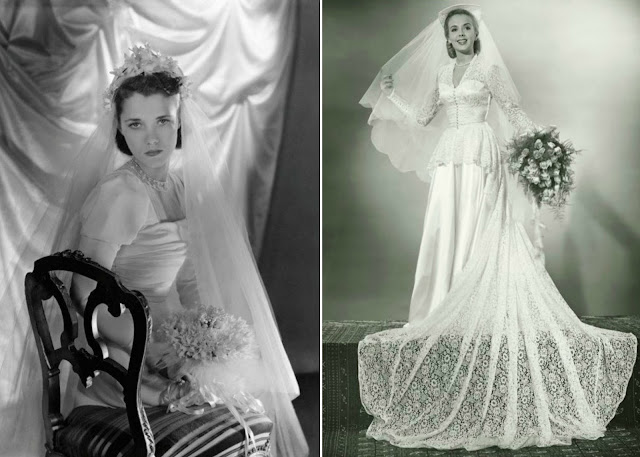 The Good Old days! In the 40s, most brides wore a veil.
Thank you for posting this fine collection, Amy-Jo.
Regards,
Sheila