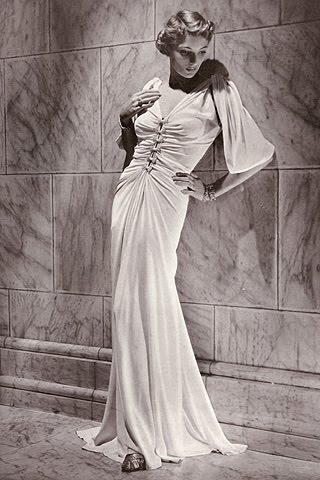 source
Pioneer of the bias cut, Madeleine Vionet, once said, '"When a woman smiles, her dress must also smile" . Translated I think madamoiselle may have meant, a woman is happiest wearing her gown like a second skin. Long before the development of knits, the bias cut was used for body-hugging silhouettes like the Vionet original above. It all started back in the 1920s when the Parisian couturier developed a technique utilizing the true cross grain of fabric rather than straight grain lines of weft or warp of the fabric. Vionnet used fabrics like crêpe and charmeuse; These were novel to women's wear in the 1920s and 30s. She also ordered fabrics two yards wider than the 19-36"norm for the time so that she could work out draping and layout techniques. As a result gowns and dresses moved beautifully when cut on the bias. Vionnet's trademark: styles that cling to and move with the wearer. Examples: Bias cut gowns with cowl necklines, the handkerchief dress of the 1920s, and halter top. By 1930, Hollywood designers took advantage of Vionet's bias cut and made it into a real trend via moving pictures. Today the bias cut gown is a classic option for brides. 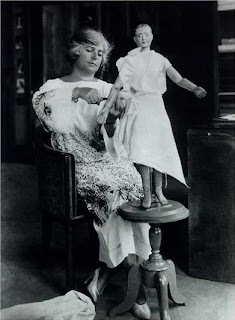 source
Madeleine Vionet in her studio circa 1920 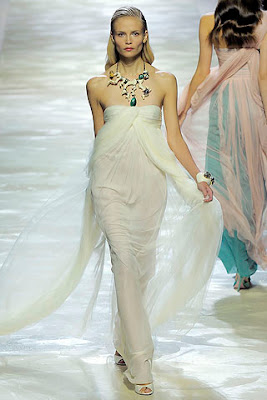 With tulle overlay by Blumarine 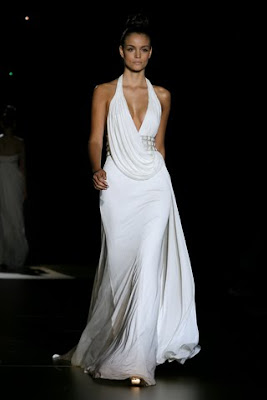 Greco-Roman in inspiration, by Rosa Clara. 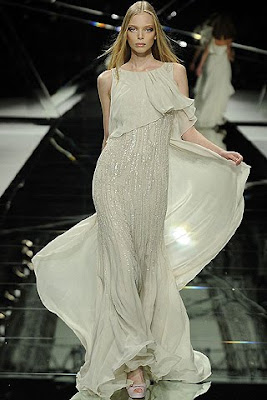 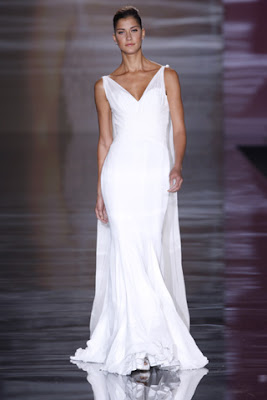 V-shaped neckline by Manuel Mota for Pronovias.
Posted by bridechic at 12:00 AM

amazing dress...i really love it ... and love your blog:)Maybe we can follow each other? http://comeduegoccedacqua.blogspot.it/

Thank you for that wonderful history lesson!!! Each dress pictured here is amazing in its own right. They all look as if they have the ability to make me feel like a natural woman!!!!
xo
Darling Bonnie
thehouseofdarling.blogspot.com

oh wow. these dresses are just so sexy and gorgeous. what a great style.