ROYAL BRIDES AND THEIR GOWNS: Fabiola of Aragon

Today we're introducing something new to ring in 2010 called, 'Royal Brides and Their Wedding Gowns'. I'm so excited about this feature. If there's one thing my readers love it's grand weddings with all the hoopla and trimmings. The idea came about once I realized posts about the big time royals like Queen Elizabeth, Diana and Grace Kelly were your favorites. But what about those royals not so in the spotlight who had gorgeous gowns and designers? Researching them, I realized royal brides through the 20th-21st centuries have had some of the most traditional looks and simplest gowns in the finest of fibers that you shouldn't be missing out on. First in the series is the gown of Fabiola of Aragon by Balenciaga . . . 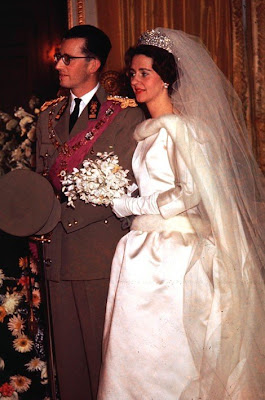 Fabiola of Aragon was born in the palace of the de Mora y Aragon family. Upon finishing her training as a nurse, Doña Fabiola began work in a hospital in Madrid. Both the Mora y Aragóns and the Belgian Royal Family were connected and this triggered the meet up between King Baudouin. the bachelor King of the Belgians and Fabiola.
The wedding took place on the cold winter morning of December 15, 1960. The civil wedding was performed in the Throne Room at the Royal Palace in Brussels, and the church wedding in the St Michel & St Gudule Cathedral 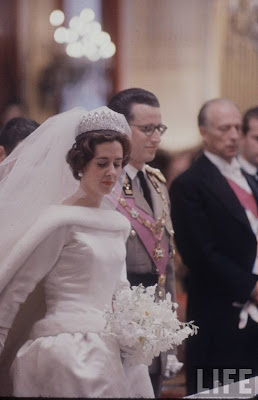 source
This gown is an absolute masterpiece created by Spanish design legend Cristobal Balenciaga. Peau with a mink collar and twenty foot train, it suited this winter bride well. Balenciaga was one of a handful of couturiers who could actually design, cut, and sew his own designs. A designer's designer, his minimalist creations that were so well crafted they resembled sculptures, were considered the optimal of haute couture circa 1950s and 1960s.
Balenciaga would have stayed in Madrid designing for the Spanish aristocracy but the Spanish Civil War forced him to Paris where post war he did some of his most innovative work (see what hanging with a bunch of Paris designers can inspire?) 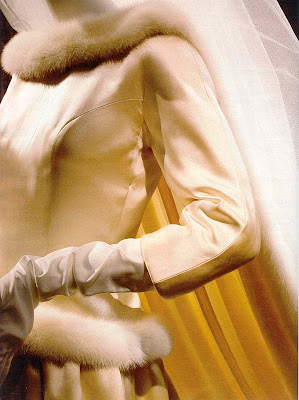 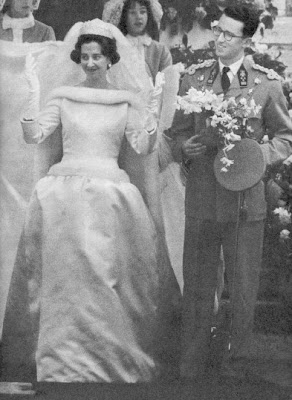 source
Posted by bridechic at 12:35 AM