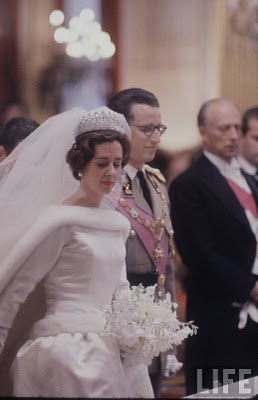 More brides than you realize actually tied the knot in December, combining their nups with a season of Christmas festivities.  Above is Fabiola of Aragon who married Baudouin, the King of the Belgians. Their wedding took place on the cold winter morning of December 15, 1960. Her gown was an absolute masterpiece created by Spanish design legend Cristobal Balenciaga. Peau with a mink collar and twenty foot train, it suited this winter bride well. Balenciaga was one of a handful of couturiers who could actually design, cut, and sew his own designs. A designer's designer, his minimalist creations that were so well crafted they resembled sculptures and were considered the optimal of haute couture circa 1950s and 1960s. 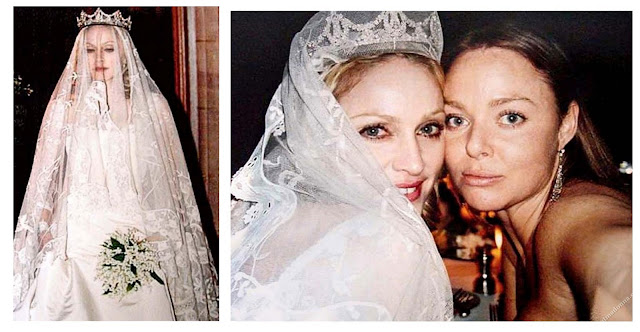 source
Remember all the hoop-la when Madonna married Guy Ritchie back in 2000?  They were hitched December 22 in a Scottish castle.  Stella McCartney stepped up not only as her designer but also as maid of honor.  In an ivory strapless, the always over-the-top and shock your-socks-off rock star went with a royal/princess/castle theme wearing a vintage diamond tiara from Asprey & Garrard under a lace veil. 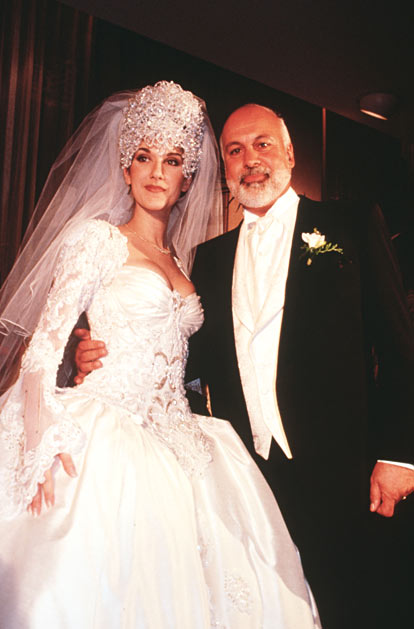 source
Celine Dion married her manager Renee Angeli on Dec. 17, 1994 in Montreal, Canada.  Note that her tiara weighs 7-pounds and has 2000 Austrian crystals covering it.  Her gown was really a splendor by Mirella and Steve Gentile--a work of art that took 1,000 hours to make . . . . 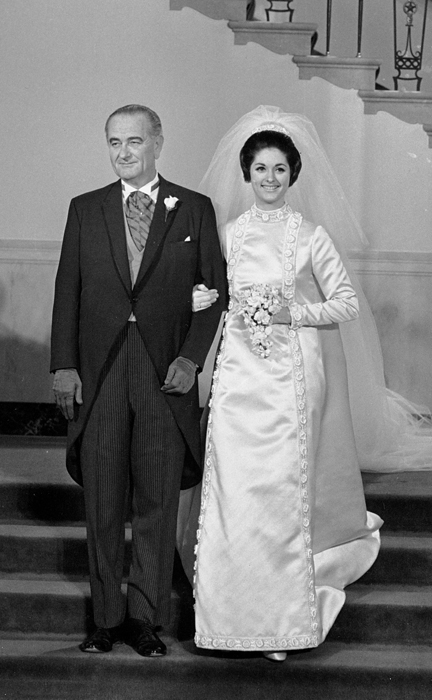 source
The 1960s was a decade for Presidential daughters to tie the knot.  Lyndon Johnson and Richard Nixon who reigned from the mid to later part of the 60s both had a pair of daughters of marrigable age.  Above: On December 9, 1967, President Lyndon Johnson's eldest daughter Lynda married Marine Captain Charles Robb in a White House all decked out for Christmas. Seven bridesmaids were in floor-length red velvet gowns. Among the guests was former first daughter Alice Roosevelt who also married in the White House in 1906.

Lynda's designer was Geoffrey Beene. She chose this empire sheath silhouette in a winter-weight peau satin. Notice the border of heavy lace running vertically up the front of the gown creating an apron-like effect. Trendy at the time, was her detachable Watteau train that fell from her shoulders. Topping it off, she wore a pill box cap with a blusher and very long pouf veil. 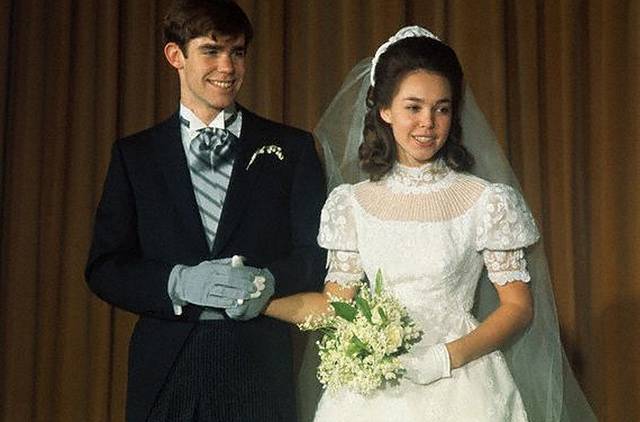 source
Above: Richard Nixon's youngest daughter Julie was first to tie the knot and did so only a month before her father took office. December 22, 1968, Julie Nixon and David Eisenhower were married by Rev. Norman Vincent Peale in Manhattan's Marble Collegiate Church. Because her father was President-Elect at the time, Kleig lights, the curious and press turned up in droves.  Though a White House wedding with all the trimmings was offered, Julie and David wanted a private ceremony. They managed to keep their guest list a secret amid all the change in their lives. In addition, their Grand Ballroom at the Plaza wedding reception was closed to all press.

Julie's gown was by Pricilla Kidder aka Priscilla of Boston. High-necked with pearls and beadwork, it had puffed sleeves and a long train. The bridesmaid ensembles were brocade overcoats with long Juliet sleeves.
Posted by bridechic at 12:14 AM

such great brides :) i'm always fascinated by a winter wedding.

Simply gorgeous!!! Thanks for sharing them. They were just exquisite. :)
http://sassyuptownchic.blogspot.com/

A december wedding would be marvelous!! xx

Buff, Celine, what a dress!amazing, is horrible. Kisses.

Wow, Celine looks so different in that dress!

Love the post.. very interesting!!. All the gowns are beautiful :)

It was just cloudy...

Florida is weird/alittle deceiving..:) But gorg...

The wind was blowing and the clouds were moving rapidly...

I'm not a fan of winter weddings!
I believe that the perfect wedding must be in Spring or Summer!

I want to thank you for this post. This information was very helpful.Please keep up the good work and I look forward to more of your great posts!russian ladies