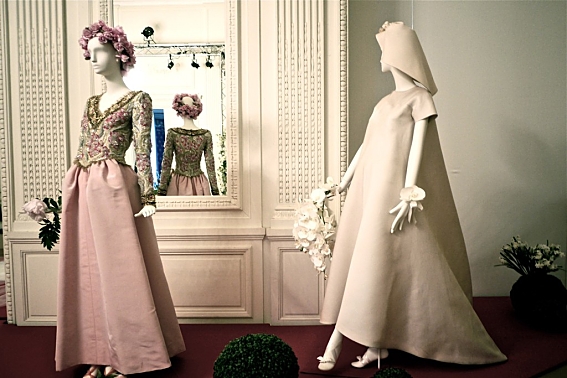 via
The 60s-70s in a way was a juxtapose.  While the world was exploding politically and socially, bridal fashion stayed pretty much restricted and traditional.  On the other hand the late sixties/seventies era is known primarily for wild and off-beat chic that sometimes made its way into bridal wear.   Thanks to a some savvy designers, the funk was fine-tuned into into high fashion.  The era was the most politically charged of the century and invariably spilled over even into haute couture. 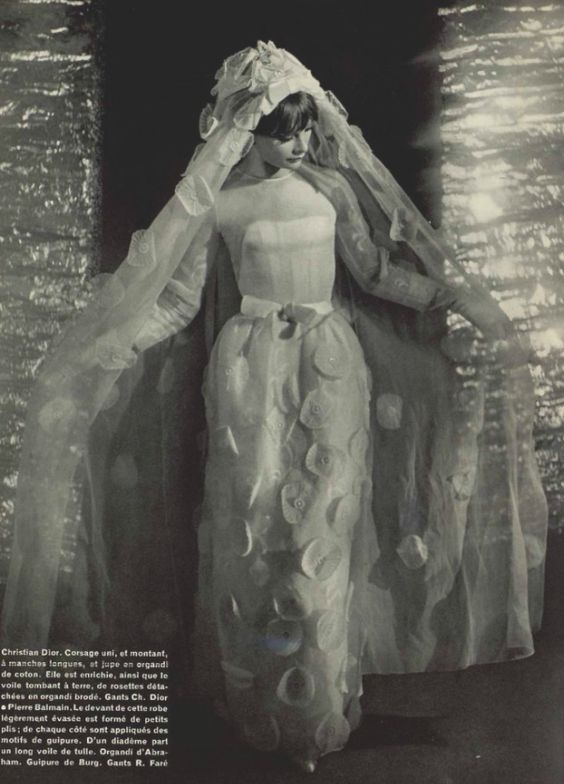 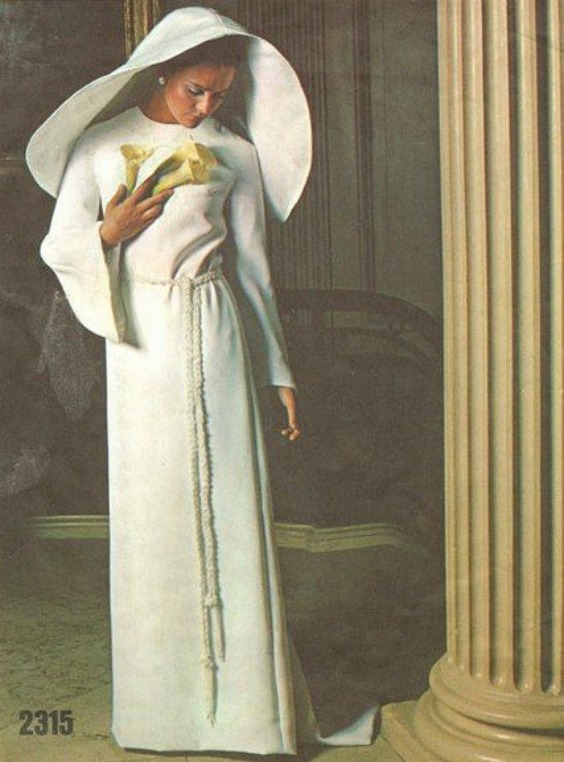 Above: BW Christian Dior organza dress circa 1965 with cut out florals on skirt and veil ///Directly Above: A 1970 Vogue Pattern for a modernist/monastic bridal gown with a corrosponding headpiece Below: Crocheted dresses made their way into fashion big time during the 60s, bridal wear was no exception right down to the cloche kniited cap in place of a veil.  Via Vintage Visage 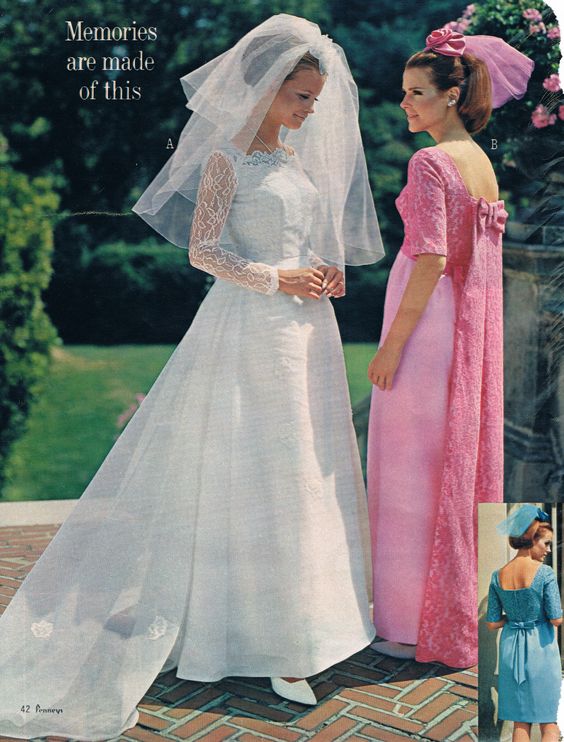 Above: Pouf veils, long and short had their hey day in the 1960s. These above are fromThe JC Penny catalog circa mid-sixties.  Below: Top of the line lace and fashion by Pierre Balmain lace gem circa 1977 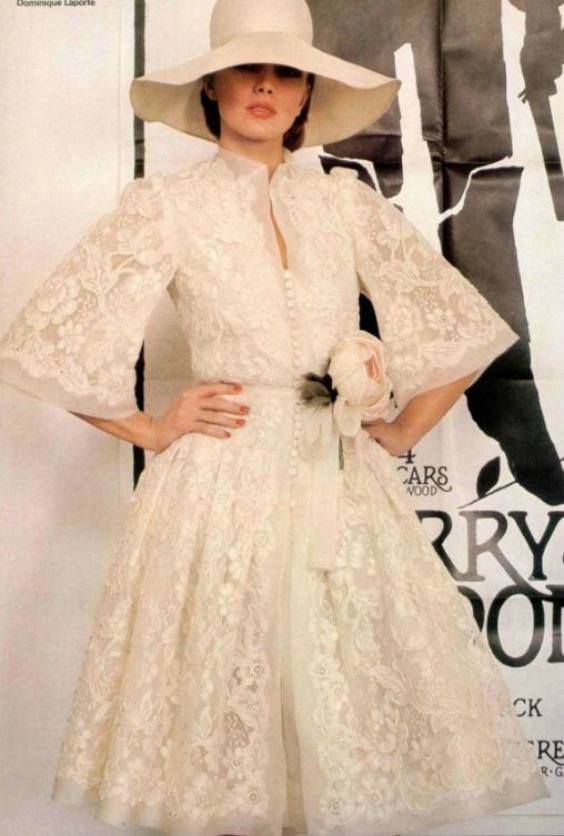 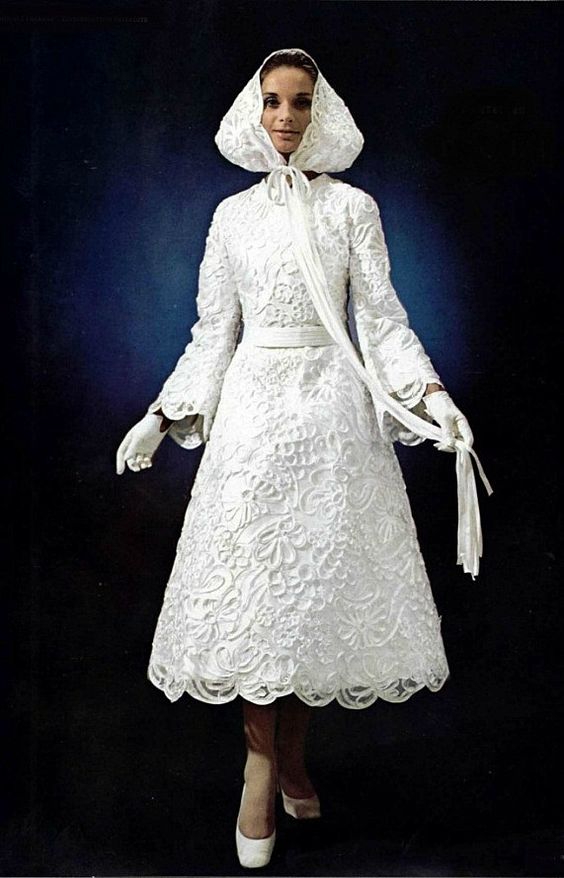 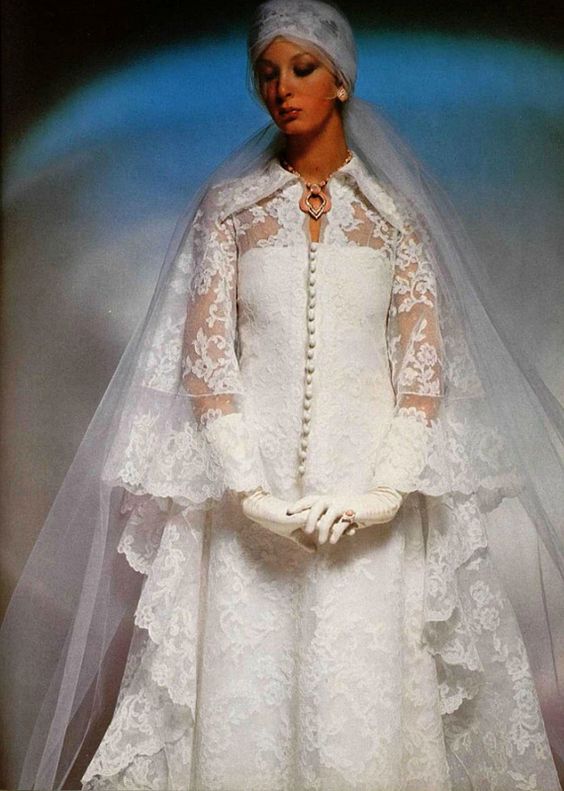 Above: A sophisticated peasant look in lace by Carven circa 1969//Directly Above: A wedding dress in Chantilly lace from 1975///Below.  A Ron LoVece circa late sixties 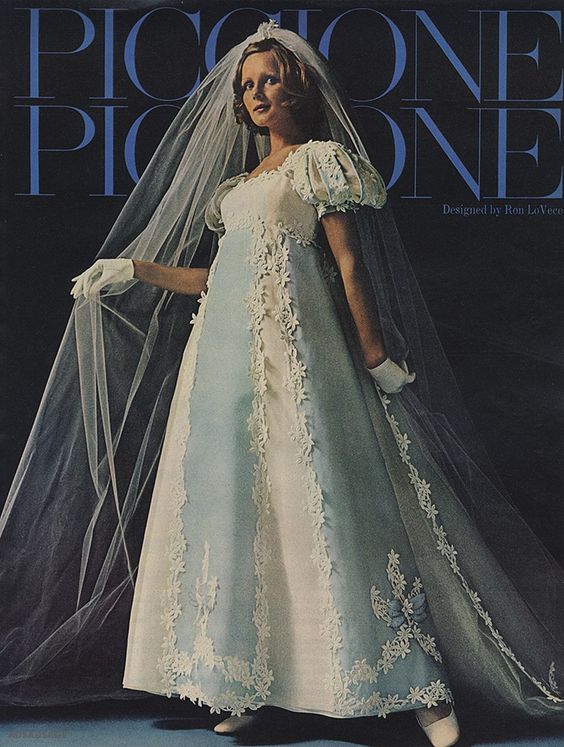 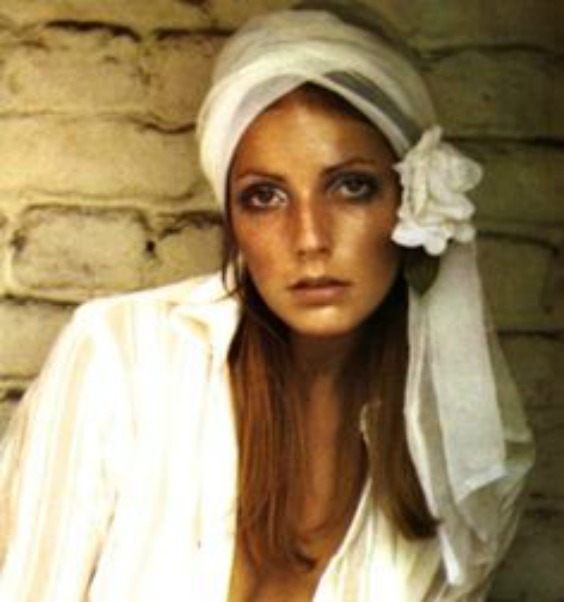 Above: British actress Annie Lambert from the 1970s.  The scarf is apropos for a 70s wedding. Via Pinterest///Below: I call this gem below the cookie cutter bridal uniform of the 1970s.  Lovely, yes but pretty restricted.  Via Yahoo Images 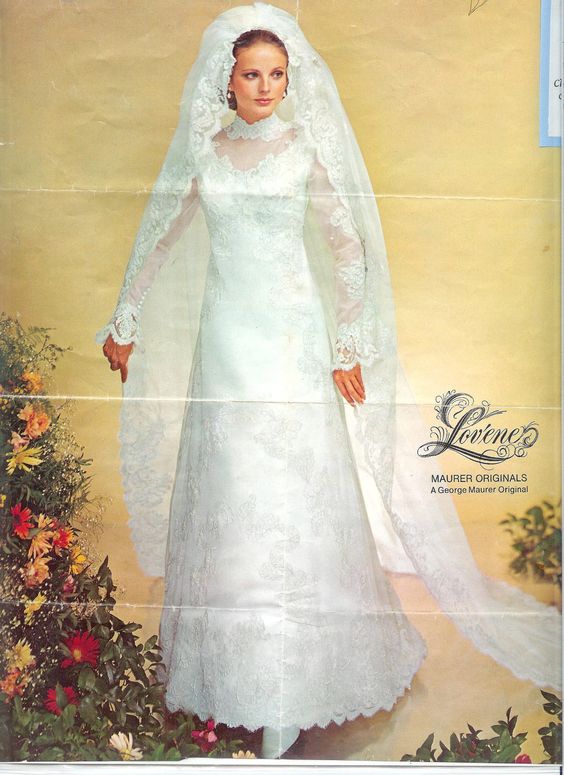 Below: The mid to late 1970s was the emergence of Peasant and Prairie Revival fashion..  While designer Jessica McClintock revived the Prairie Gown with her Gunne Sax line in the seventies, the more haute couture versions of Prairie came to us through the stunning creations of  British designer, Laura Ashley.  She used finer imported cottons and voiles//
Directly below: A peasant dress by Yves Saint Laurent///Below: An Edwardian dress via Seventeen Magazine 1974 Tumblr //Below: via Lipstick and Curls 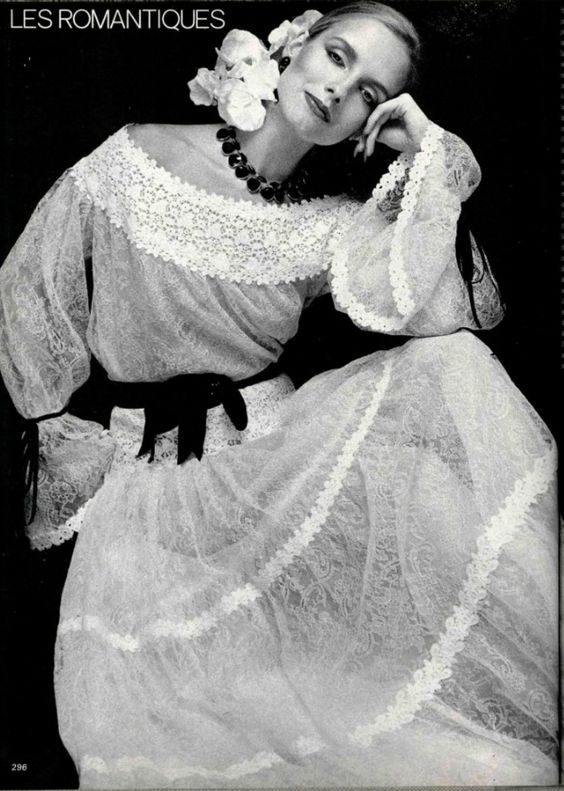 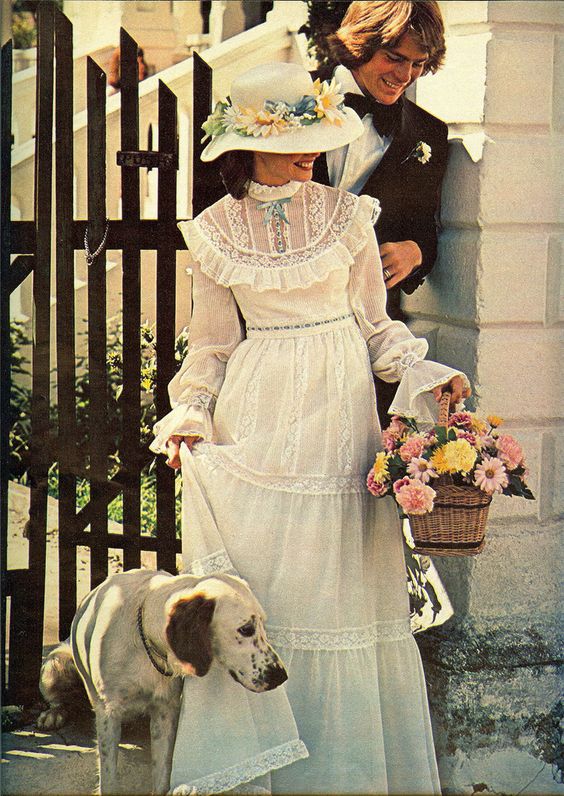 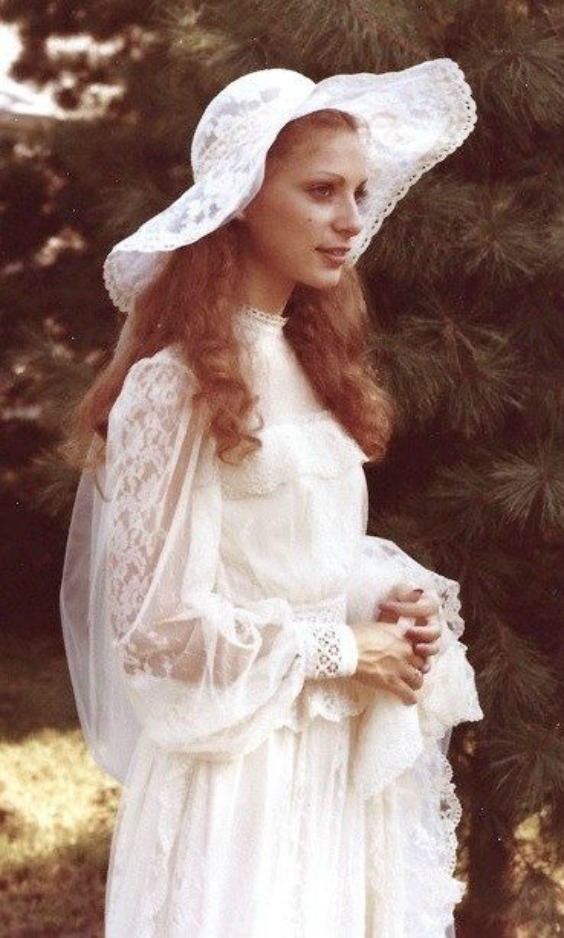 Great shots, these old designs have a certain something!

Dear Amy-Jo,
Lovely gowns, even though you did not design them!
The veil worn by the bride in the Christian Dior gown us absolutely breathtaking. The “modernist/monastic bridal gown” is different, and to me, absolutely striking. It would be a wonderful gown for the right bride.
Regards,
Sheila