THE GRACE KELLY FACTOR: GETTING THE LOOK 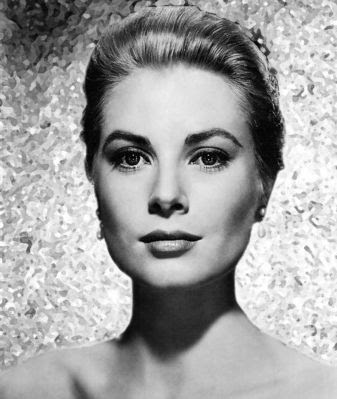 "Throughout both her careers, Grace had one attribute--class"
--Jimmy Stewart--

In Judith Baliban Quine's book, The Bridesmaids, she writes, "Had you been there as I was you might have realized that day, like the bride-to-be herself, was a creation brought to us through the joint production efforts of enormous willpower, Metro-Goldwin-Mayer and God." Quine goes on to say MGM was actually a late arrival on the scene as most everything that came to Grace, despite her Mainline Philadelphia birth and refined beauty, was won only through time and dedication to her work. 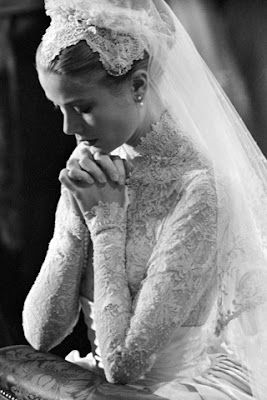 April 19, 1956, the world was treated to a storybook romance come true when actress Grace Kelly married Prince Rainer of Monaco. Thinking back to roles she played before she became a princess, we remember Grace Kelly as the ultimate 'Deb'. Had she not pursued acting with such determination, in all probability she would have become just that : A Mainline Philadelphia Debutante. As a result, on film she reflected that cool, refined blond to perfection.Princess Grace's gown to this day is one of the most traditional and remains the touchstone in bridal fashion. Impeccably made, the taffeta and Val lace confection was a wedding gift from MGM Studios. Imagine this: 25 yards of silk taffeta, 100 yards of silk net, and vintage Belgian rose point lace. Her headpiece was classic : a bandeau cap covered in tiny seed pearls under an intricate lace mantilla.Designed by Helen Rose who worked on Kelly's costumes for High Society and The Swan, the gown was designed and run up in less than four months if you can believe that. Hollywood by then was ace at whipping up a masterpiece if a movie or event demanded. Over thirty seamstresses labored on the gown in the MGM workrooms round the clock. From a designer's standpoint, I'd have to say the Kelly gown is the most perfect dress ever made, despite it's speedy construction time. Made up of four different components, it's actually a combination of separates all put together to look like a traditional ballgown. Studying the construction diagrams with the fitted, long-sleeved bodice and full bell skirt, this gown though cutting edge back in 1956, will always be timeless. 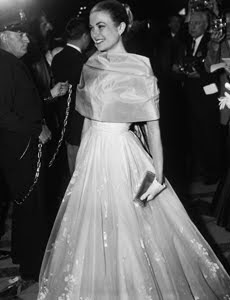 Getting the Look
Grace's knack for looking chic was her simplicity and that became her real trademark. Never overdone, typically she wore clean and minimal make up accentuating her Patrician beauty. Add to that pulled back hair and a classic strapless gown for evening like the image above and you have her look. Though her actual wedding gown was traditional, she could have gone with an A-line or sheath with either strapless bateau or V-neck, and still been totally In-the-Grace character mode. The good news is, A-lines look great on just about everyone and just about everyone feels like Grace Kelly in them, ie; symbolizing class and refinement. Add any fabric that has understated elegance like traditional duchesse satin and peau de soie.

Consider adding some options to your look. A shrug or bolero can cover you up for the ceremony and be removed for reception. Want another variation of that 1950s look? How about an opaque removable top in organza or lace? This too can be removed come reception time. If you're in a sheath, A-line or evening gown add a wrap or coat either in matching fabric or, for those fall/winter weddings, in peau de soie or brocade.
If you love Grace's gown and want to incorporate components in your own, start by studying the original creation. The Vogue pattern below closely emulates this design. Luckily today's bride can be more daring. Though Grace was the epitome of a refined lady in her day, she worked in a glitzy industry. Marrying a prince, she wanted to reassure the Monegasques she wasn't just another movie star blond in sequins. Setting the tone for her reign, she chose the most classic of all designs. Contemporary brides might want to experiment with a different neckline or modified skirt. Here's another idea. Grace's bodice was actually a blouse. You could experiment with a shrug or jacket over a strapless gown. 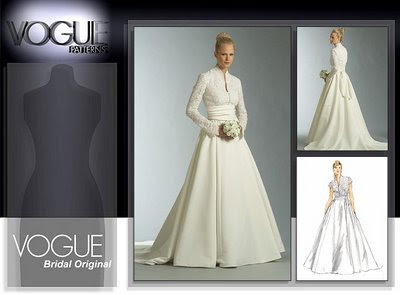 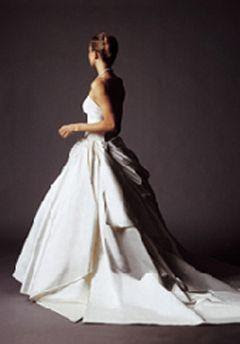 One Wed
Romona Keveza's rendition on the ballgown Grace Kelly wore at her 'Wedding Eve' celebration. 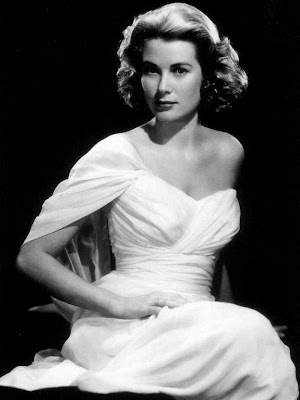 Grace style by vivien22 featuring Monsoon bags
Always a lady, Grace's signature pieces were a pair of gloves and a hat much like the those shown here. Only the shoes are a bit off. Grace is remembered for her elegance but ironically she had somewhat stogey personal taste when it came to foot chic. Unless, that is, MGM was dressing her. Then she had the best . . .
Photo source
Posted by bridechic at 12:41 AM

What a fabulous post! One of my all time favorites is the stunning Grace Kelly and there was never a more beautiful bride! Her dress was an exquisite masterpiece and like you said, it was the most perfect dress ever made!

it really is such a great look...I would love to wear her dress even today! totally timeless...

If I didn't look like Audrey, I would want to look like Grace! What a beauty! One day I will have a signature look for my wardrobe, just like she did.

Everything is so stunning!

Sigh Gace Kelly still takes my breath away! I'd love to see more brides take on a Grace Kelly style in their gowns!

Lea Salonga had her wedding gown created by Monique Lhuillier, based on Grace Kelly's wedding gown. I think that's one example of how to modernize a classic and still make it look like a classic.

I am moved by her praying.