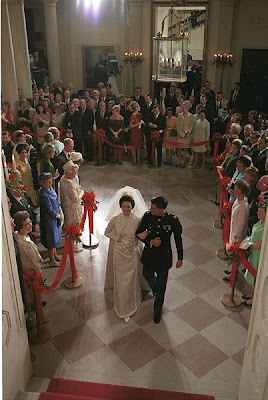 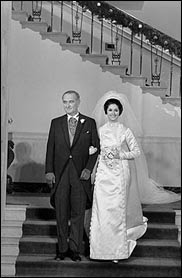 source
On this day in 1967, President Lyndon Johnson's eldest daughter Lynda married Marine Captain Charles Robb in a White House all decked out for Christmas. Seven bridesmaids were in floor-length red velvet gowns. Among the guests was former first daughter Alice Roosevelt who also married in the White House in 1906.

Lynda's designer was Geoffrey Beene. She chose this empire sheath silhouette in a winter-weight peau satin. Notice the border of heavy lace running vertically up the front of the gown creating an apron-like effect. Trendy at the time, was her detachable Watteau train that fell from her shoulders. Topping it off, she wore a pill box cap with a blusher and very long pouf veil. 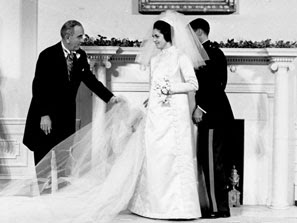 source
Lynda and father, LBJ
Lynda's dress looks a little like Priscilla Presley's who also married in 1967. Bridal wear in the 50s-60s didn't reflect current couture as much as it does today. Nor was there much freedom to expose decolletage, arms, cleavage and backs unless you were something of a rebel bride. There were so many restrictions and rules brides had to follow, so that compared to today, a bridal gown sometimes seemed more like a lace and satin uniform.

So what are these two love birds Lynda and Chuch doing these days? Still solid. Since 1967, Chuck Robb has had a successful political career, serving as governor and two senate terms; Lynda is active in children's literacy programs.
Posted by bridechic at 10:16 AM