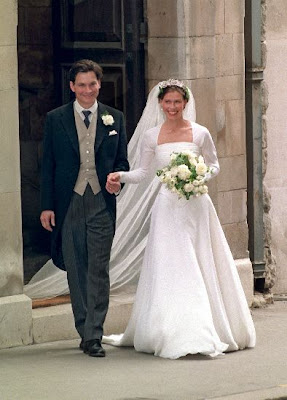 
We remember her best as Lady Diana Spencer's eldest bridesmaid clad in tissue taffeta in the 1981 wedding extravaganza that brought both Diana and storybook bridal design into the spotlight. Lady Sarah Armstrong-Jones, was a teenager back then. Fast forward July 14, 1994, Princess Margaret's only daughter married actor Daniel Chatto. Not your typical royal event, a scant 200 guests graced the invite list to St. Stephen Walbrook, the relatively small 17th century church, a stone's throw from St. Paul's (where Charles and Diana wed). If you can believe it, there were no TV cameras and Sarah didn't show up in the family's gold coach. 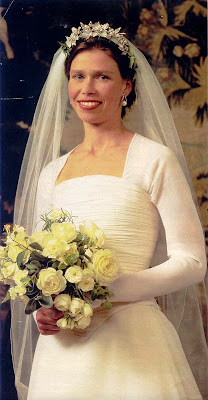 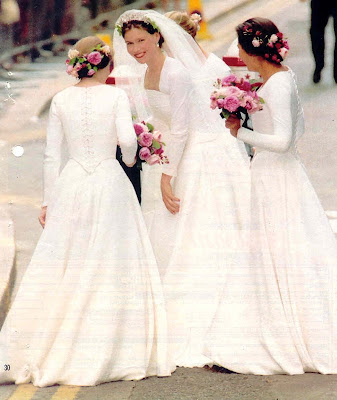 sourceSarah and Daniel met in India when she was working as a wardrobe assistant on the 1983 movie Heat and Dust. Sarah did a six-year program at the Royal Academy of Arts. In 1991, she had a show in Knightsbridge exhibiting her abstract landscapes. By this time she and Chatto whose six-year acting stint started with a role in Heat and Dust, were already a tight couple, often seen going to the theater art gallery openings. Both artists, Chatto gave up acting for art, and went on to do his own show in 1992 at the Cadogan gallery. 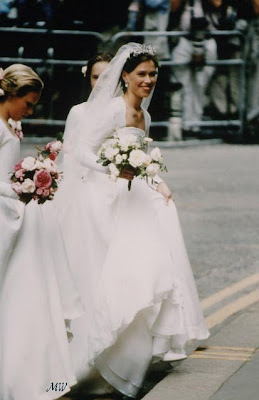 Dubbed the Boho Wedding of the year by the Daily Telegraph, it was a quiet and elegant ceremony. The Armstrong/Chatto wedding was written up as a showcase of fine taste by the London press. In 1994, the Windsors needed all the positive press they could get. In the midst of the Charles/ Diana feuds these royals kept their dignity despite all the family turmoil. Princess Diana arrived at St. Stephen's unescorted and Charles followed accompanying the Queen Mother, then 93. While during the ceremony Charles and Diana shared a pew, they had little to say to one another. 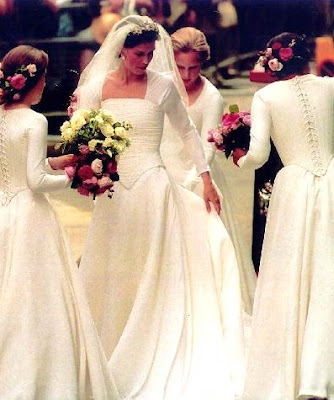 source
While there was no family heirloom tiara holding the bride's veil in place, Sarah did sport a circle of honeysuckle and looked timeless in her custom designed Jasper Conran. Conran's simple confection was a white draped georgette with ruched bodice reminiscent of 1940s, especially in the bodice. To date Conran's design for Sarah Armstrong and her maids remain some the the best and most inspiring work in bridal fashion.

In 1982 Vogue called Jasper Conran a ‘British superlative’. At only 26 he won the British Designer of the Year Award. Here's what Mary Quant had to say about Conran, 'He makes clothes women want to wear’.
Posted by bridechic at 12:58 AM

awww, they look so adorable in their white dresses!

The bride and groom's attire is stunning! Love the attendants dresses in white! The brides floral touch to her veil is beautiful!

Lovely. Something very approachable about this wedding.

such an adorable couple!

What a classy, simple and elegant gown and beautiful woman. I love the photo of her smiling with her bridesmaids. What great history and bridal knowledge you have. :)

Sarah, in my opinion, is still the most beautiful, classiest royal bride!!!

This is such a great source that you are offering and you provide it with a way for totally free. I really like seeing sites that comprehend the value of offering a top quality details about chiffon wedding dress.

Superb. Such a beautiful and trendy passionate modern dresses. Its looking awesome. I like this Blog very much. Please try to Post Beautiful Shrugs and Kurtas.

nice information. Thanks a lot for sharing it.

Nice blog thanks for sharing this informative blog with us.
Cheap etizolam online

The bride is also beautiful
marriage garden in indore