FICTIONAL BRIDES AND THEIR WEDDINGS 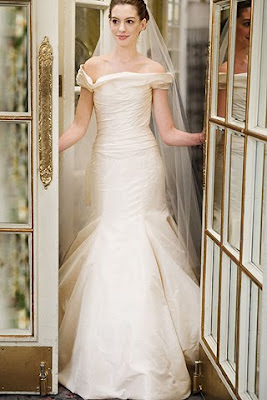 Anne Hathaway in the film "Bride Wars" (2009).
© Foc
If you've been following my blog for any length of time you know by now how much I respect Hollywood's influence as well as contribution to bridal fashion. These may not be real brides but the designers, writers and producers who created them certainly are. Thus, actresses who wear these creations inspire the way we look at weddings and fashion . 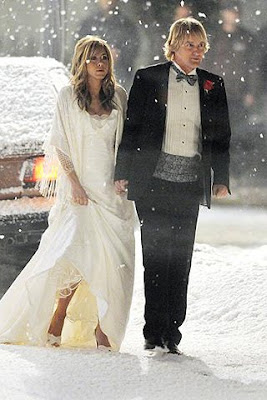 Jennifer Aniston along with Owen Wilson in Marley & Me. Gown by Susana Molina. 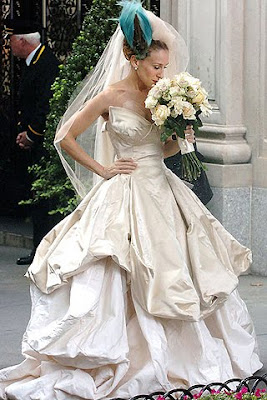 Sarah Jessica Parker wore a Vivienne Westwood dress in the film "Sex and the City" (2008).

This dress made fashion history. Yes, Carrie Bradshaw is fictional but we've gone through too much with her--men, career, relationships--not to deem her real in her own way to each of us. For me she's what 2008 bridal fashion was all about: brides finally willing to take a chance with their look, (her ready-for-take-off headpiece is a good case in point). What would have once been considered too theatrical or gauche for a proper wedding not only became fashion norm, it's changed the bridal scene entirely.
Carrie's Ivory silk taffeta confection was actually one of the finale pieces from Vivienne Westwood's 2007 "Wake Up Cave Girl" Collection. Hand picked by Sex and the City stylist, Patricia Field, personally, I was surprised Sara Jessica didn't rate a custom designed gown for her role in the film. I mean heck! Didn't Audrey Hepburn have a one-of-a-kind-designed-to-fit-her-character Givenchy tulle wedding dress in Funny Face? 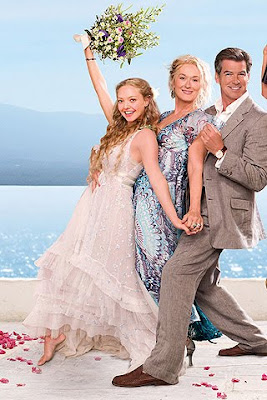 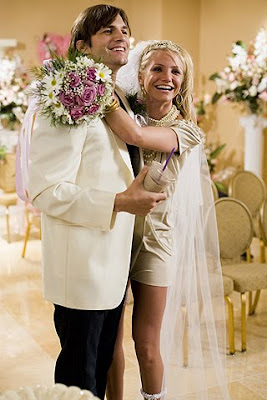 In "What Happens in Vegas" (2008), Cameron Diaz wore a champagne colored minidress, definately a popular option for today's bride . . . 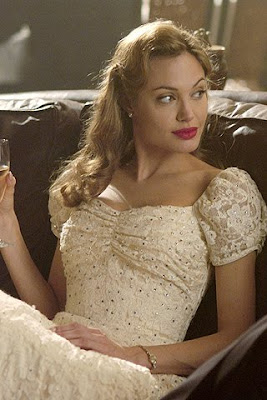 Here's Angelina Jolie. This is not the actual wedding gown worn in the film, The Good Shepherd, but costume designer Ann Roth's sweetheart gown, a design popularized by young women like Judy Garland and Debs of the late 1930s-early 40s era. 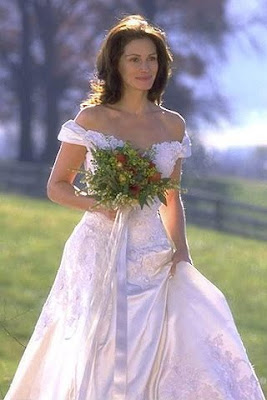 Love this post! Not sure how you come up with all your topics but they are awesome! Loved SJP's dress in that movie. Not for me.. but just love it.

I can never turn down a good wedding movie with some tears, some bridal fashion and some complications that are easy to relate to. Anne's look in Bride Wars is gorgoues!