CREATING A 50s LOOK ON YOUR WEDDING DAY When Christian Dior revolutionized fashion in 1947 with his “New Look” it was with cinched waists atop skirts flowing in yards of fabric over layers of crinoline. It marked a turning point in Twentieth-Century fashion—the hourglass, the most defined female silhouette, was back.It wasn't until around 1950 that this look we associate with the Mid-Century really took form (strapless bodice with sweetheart neckline and yards of tulle skirt). 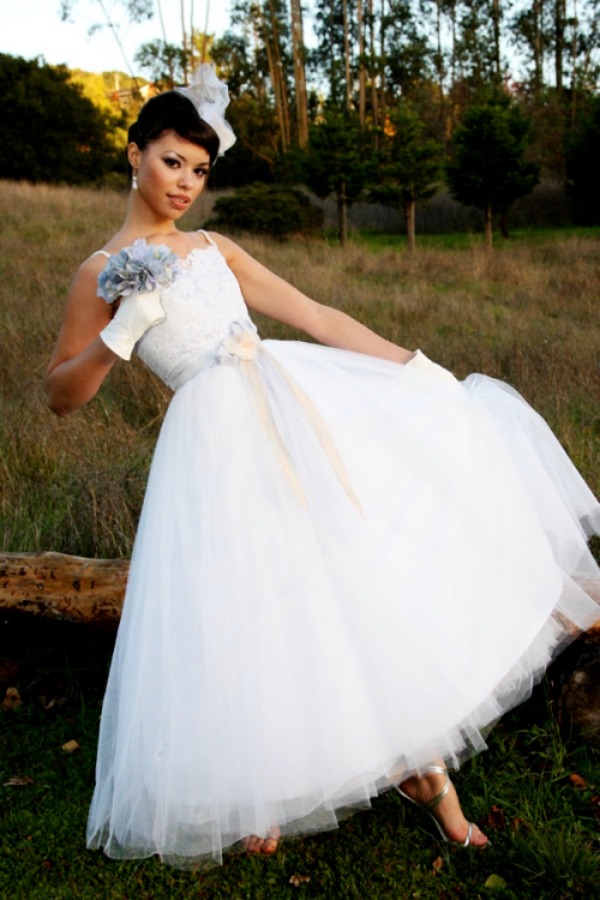 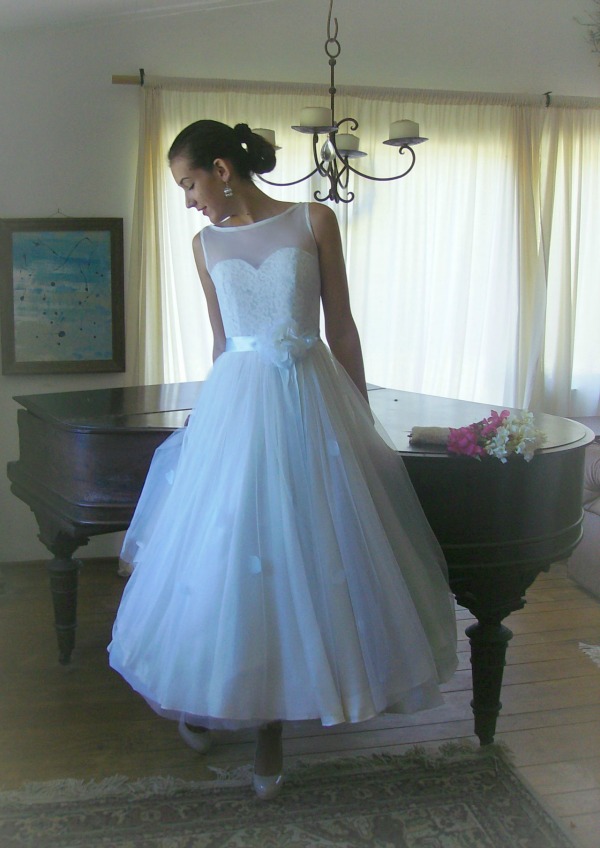 There was in the 50s an unwritten code for dressing as a bride: Arms were preferably covered, backs and decolletage could be seen only through sheer laces, nets, and organzas. The length of your gown dictated the formality of the wedding or lack thereof. To the floor meant you went formal; above the ankles was considered cocktail length or semi-formal.
Today we see reproductions of 1950’s bridal chic everywhere but updated. Gone are the restrictions! Those repros by designers are created mostly off evening gowns, prom and cocktail dresses in white, ivory, blush or pastel. Chances are an evening gown of the era has most of the elements you're really looking for in your 2016 wedding dress, as opposed to the actual wedding gowns of the day.

*Whether you're going with authentic vintage or reproducing a look, the hourglass silhouette works beautifully (See photos directly above).  The Aline and sheath style pictured below also reflect the era. 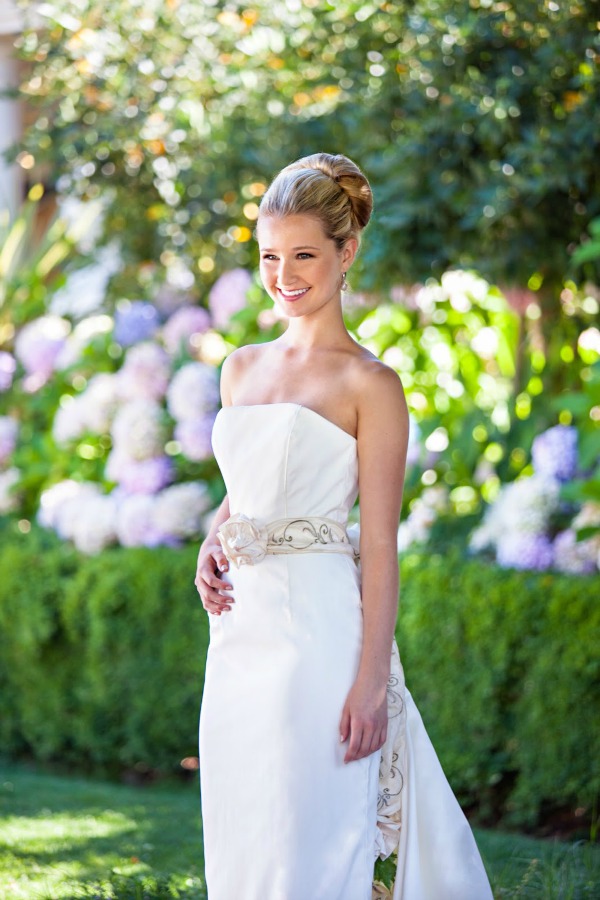 *Try to keep your hair as classic as possible via chignons, buns, etc. Hairstyling in the 1950s was the dark ages of coiffure as far as I'm concerned and you don't see too many folks trying to bring these hairdos back  Grace Kelly and Audrey Hepburn sported classic tresses as opposed to the hair chic of the day and look where it got them!.

*Cage veils have gone fashion viral the past couple years. Did you know these wisps of nose veil or netting covering the eyes weren't called cages back then, simply net? Topped off with some sort of hair ornament or floral, they were mostly worn for city hall weddings or elopements. Today you can marry in a cage anywhere.

*The pillbox hat on the bride below  is classic late 50's and would be perfect. 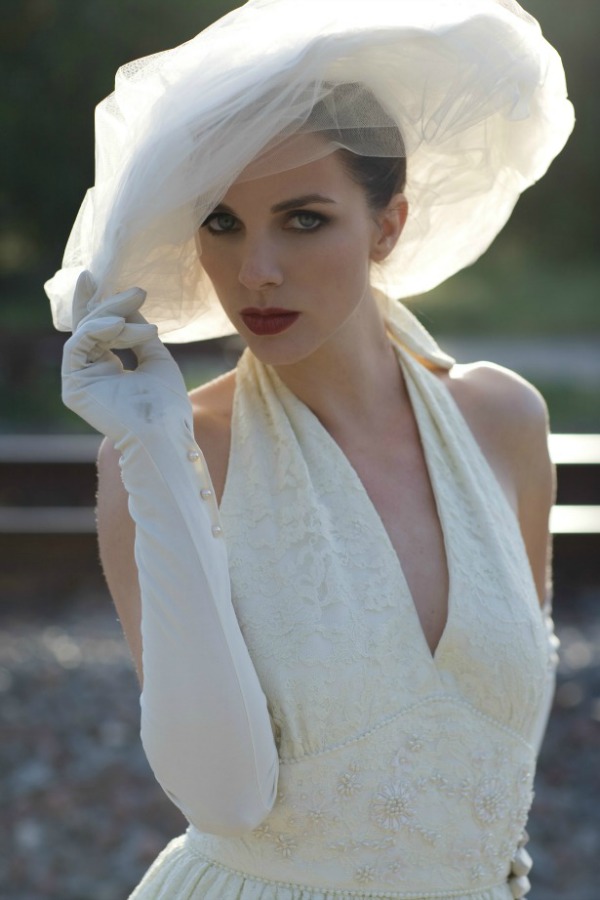 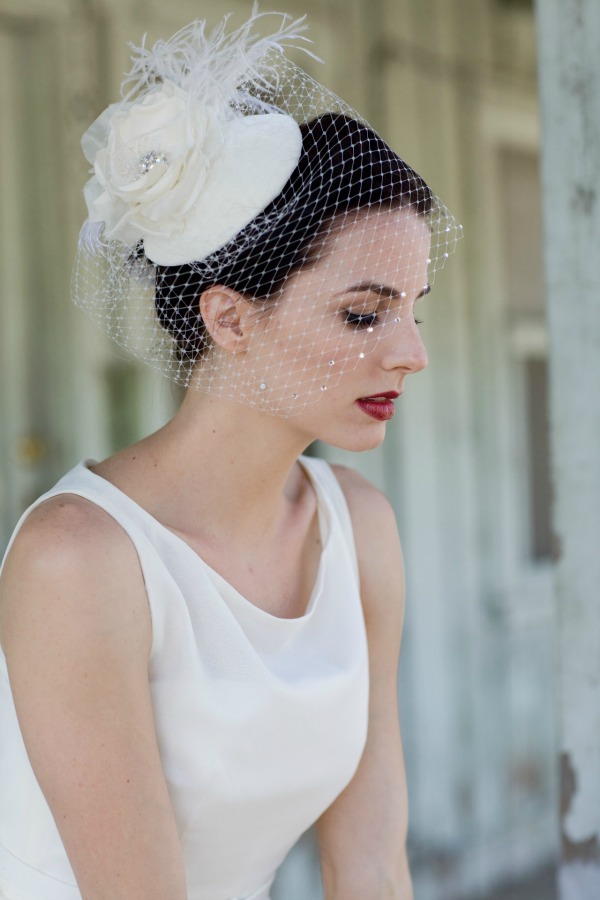 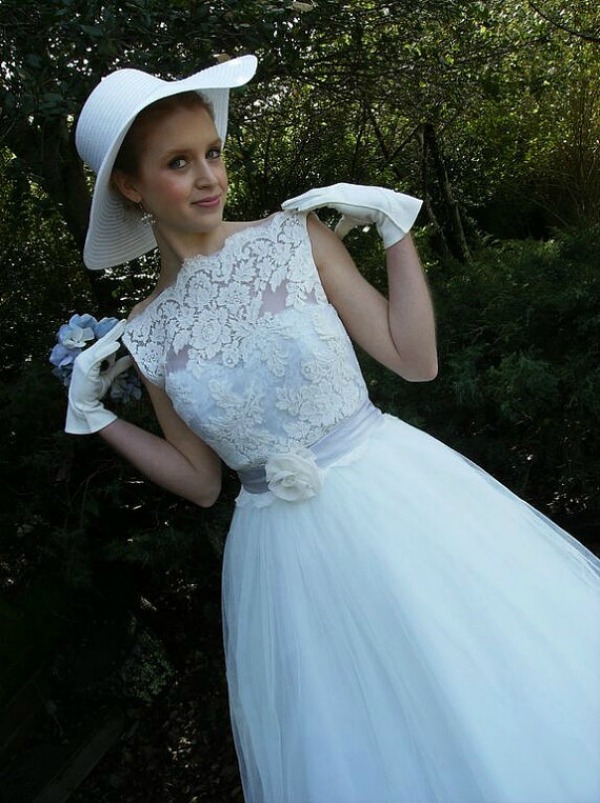 Headwear and Dresses by Amy-Jo Tatum

Thank you, Amy-Jo, for more of your wonderful gowns. They are just lovely,
Certainly, one of my favorites is picture number 4, (the Andromeda dress), and in picture number 6, the bridal hat (designed by you) and the opera length gloves add so much!
Thank you for sharing your talent with others on Bride Chic.
Regards,
Sheila

Thanks for sharing these wonderful images.

your wonderful gowns.They are just lovely, i love this, thanks a lot for share this.

All the brides on these pictures are fabulous! My best friend is marrying a really beautiful woman too. They met at the asian dating website and their wedding will also be themed by 50th.

Thanks for sharing Simply awesome images. All the brides on these pictures are fabulous! if anyone from Louisville Looking for Wedding venue Louisville may check out the our website.

Thank you so much.Its awesome and also most beautiful dress i have ever seen before.I love it very much.
Bridal Lace/Beaded Lace