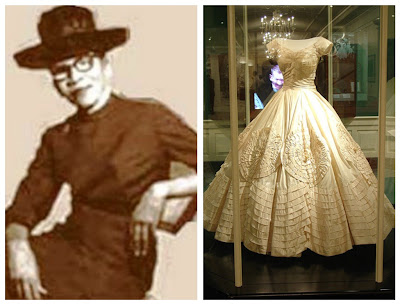 When young socialite Jacqueline Bouvier announced her engagement to Senator John F. Kennedy, back in 1953 a little-known private designer named Ann Lowe was slated to make the bridal gown as well as all in the bridal party. Lowe was a very talented African-American designer known for grand entrance gowns detailed with intricate tuck, pleat, and trapunto treatments. Amongst her clients were Rockerfellers and Vanderbilts.  Oddly, the gown Jackie really wanted would have been simpler and of less fabric, most probably created in Paris. Joseph P. Kennedy's machinations in the way of wedding arrangements along with her mother Janet's, Jackie had neither the dress nor quiet celebration of her choice. Regardless, we wonder whether Lowe ever suspected Jackie's would be one of the most celebrated gowns in history.   We know she probably did expect some publicity. But what would have resulted in $700.00 profit was gone a week before the wedding. Water pipes in Lowe's New York City shop broke and damaged ten out of the sixteen gowns. After buying new fabric, Lowe and her staff burned the midnight oil to finish the gowns on time for the Bouvier/Kennedy Wedding. She lost $2,000.00 in the process.  What a story! 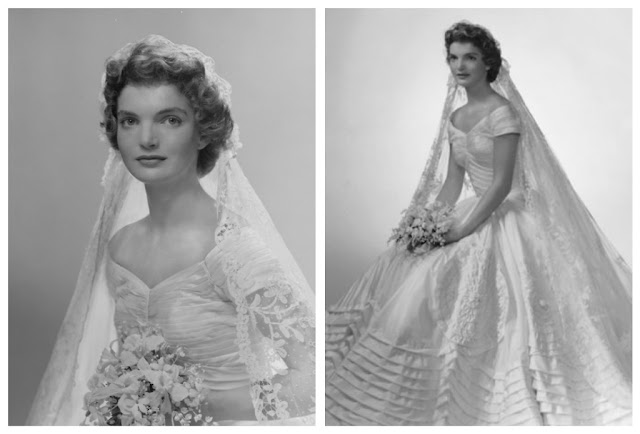 source
Posted by bridechic at 12:28 AM

Vintage wedding dresses have their special tastes.....Love them.....

What a beautiful dress, I love the detailing on the skirt. And who would have thought capped sleeves could look so chic? Great post. :)

Check out my newest post on all-black city chic:
http://bit.ly/zrNcgk

What a story. I had never really gotten a good look at Jackie's dress. I love the pleated rosettes.

I love vintage dresses. If I was more of a traditional person, I would probably choose something in a similar style.

What an incredible gown!
Thanks for introducing me to this designer!

What an interesting story! I had no idea. Thanks for sharing :) xoxo

It's a stunning dress. And I assume it was pure white when it was new? What's funny is I had never really examined the details before- the pleating... That's the style I so admire in another favorite, small time modern/current designer. Hmm!

Would that small, modern designer perchance be Peppermint Pretty? She has a repro of this dress in her collection . . .

Wow, so gorgeous! I really love it.

this is blog use full to know about the wedding dresses..

Wow,what a great wedding dress!I love it!I wish I can have one!